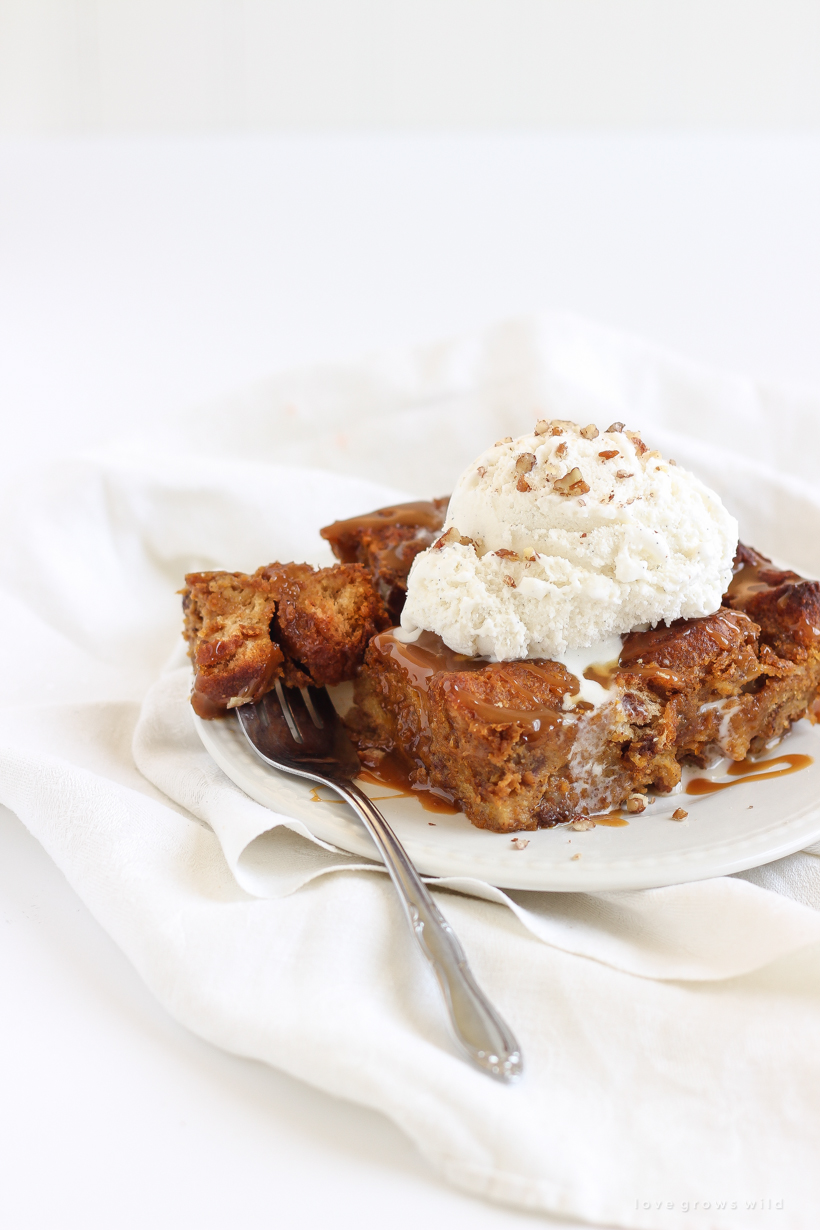 If I had to pick my all-time favorite dessert, I highly doubt I could narrow it down to just one thing, but I do know this for certain… it would be warm and gooey, fresh out of the oven, and served with a heaping scoop of ice cream on top. Something like a homemade apple pie or a giant skillet cookie or this seasonal favorite: Pumpkin Bread Pudding!

Now that September has arrived, I feel like it’s the perfect time to add a new pumpkin recipe to the collection at LGW, and this one is not only super easy to make, but it’s also one of my favorites that I make again and again this time of year. If you’ve never made (or eaten) a bread pudding before, here are the basic steps:

First, you cut dried bread (in this case, delicious cinnamon swirl bread) into small cubes. See my note in the recipe on how to quickly dry your bread if you just brought it home from the store!

Then you whip up a mixture of milk, brown sugar, eggs, cinnamon, vanilla, some other yummy stuff, and the star of the show: pumpkin. Combine with the bread cubes and throw in some chopped pecans and raisins.

Bake for about an hour, and patiently wait to serve with a scoop of ice cream, a drizzle of salted caramel sauce, and a sprinkle of pecans on top! 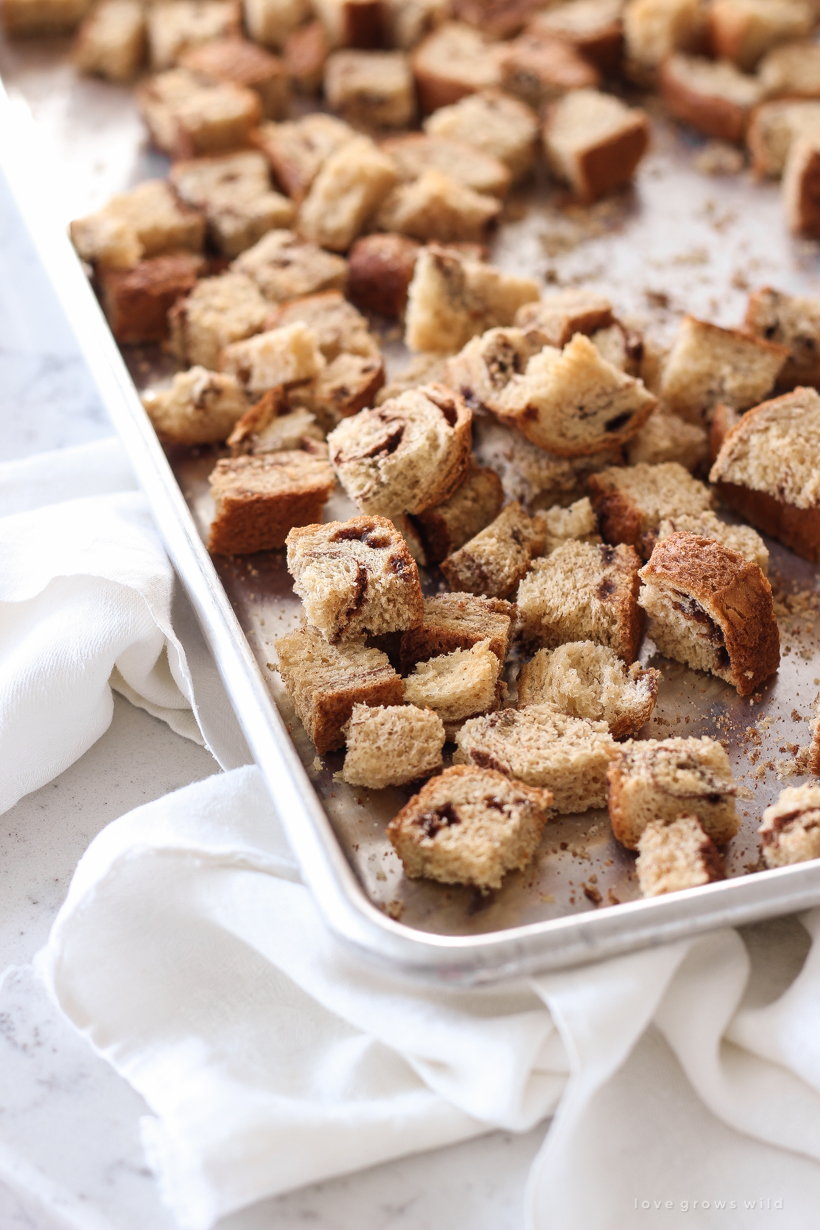 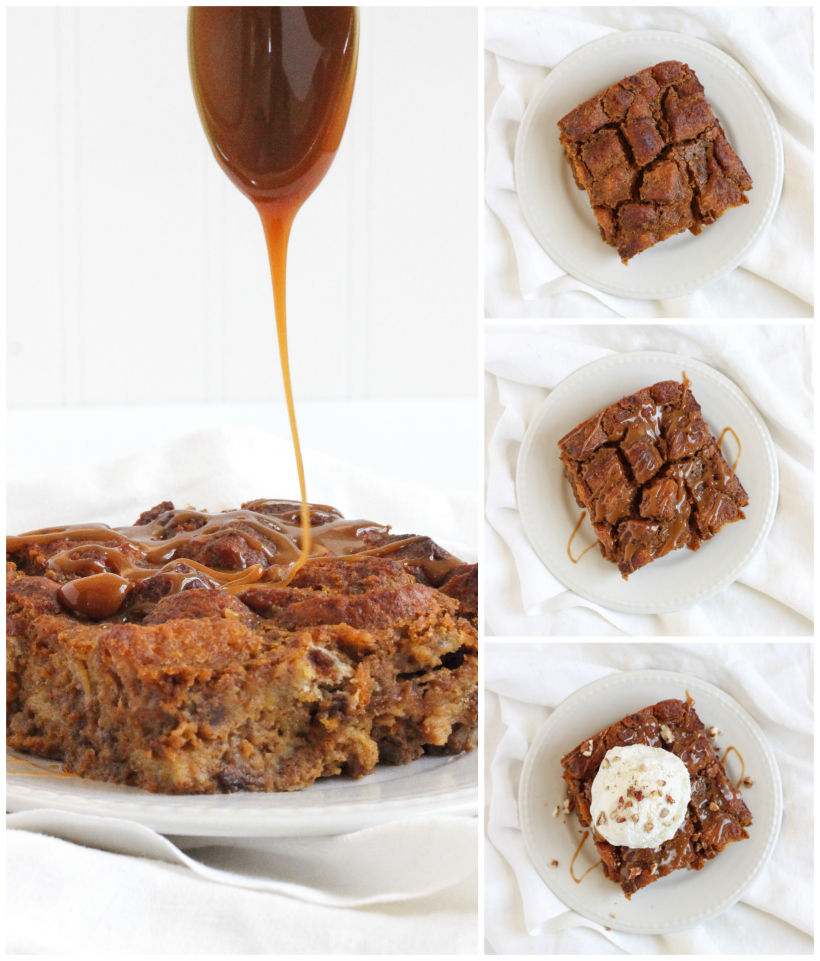 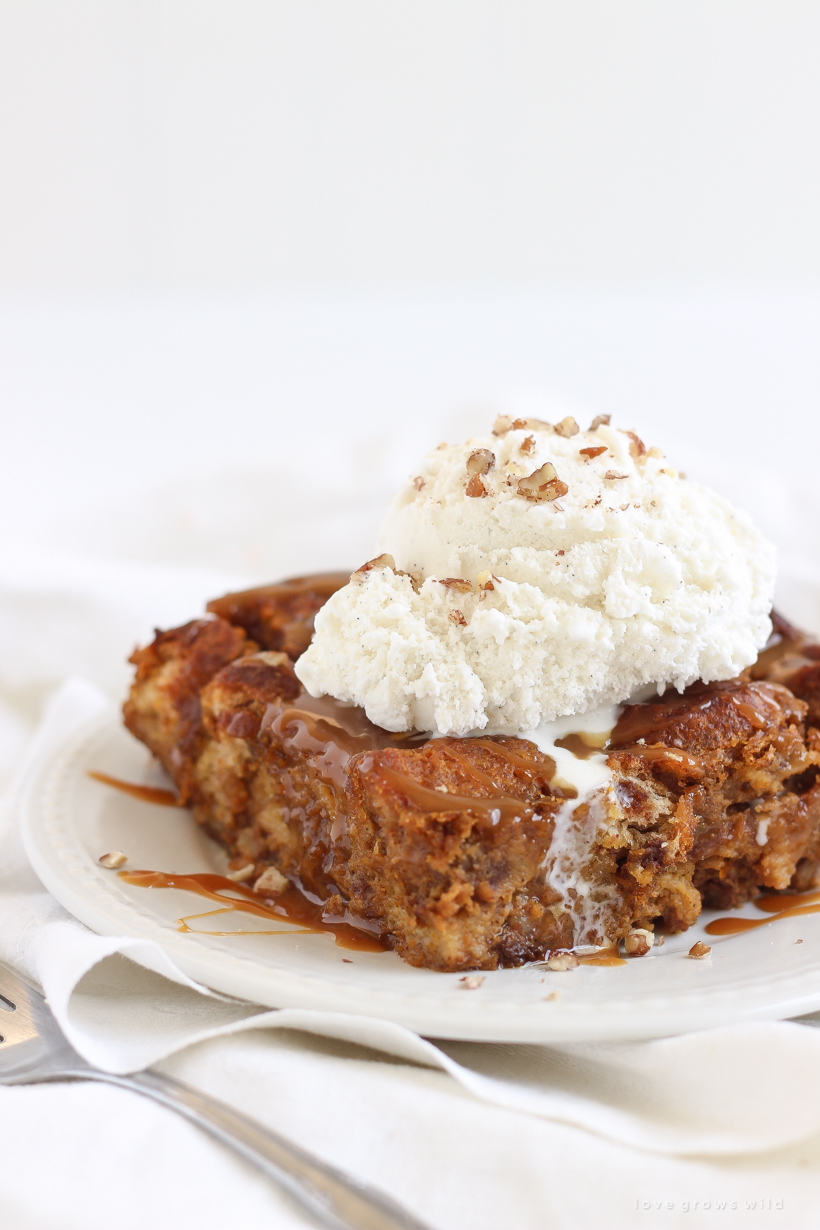 This bread pudding comes together really quickly, and I think it’s going to become one of your Fall favorites as well. If you’re not a fan of raisins or nuts, you can certainly leave them out of the recipe, but I like the added texture in between all the little bread cubes! Let me know if you try the recipe, and I’d love to hear what you think in the comments below! 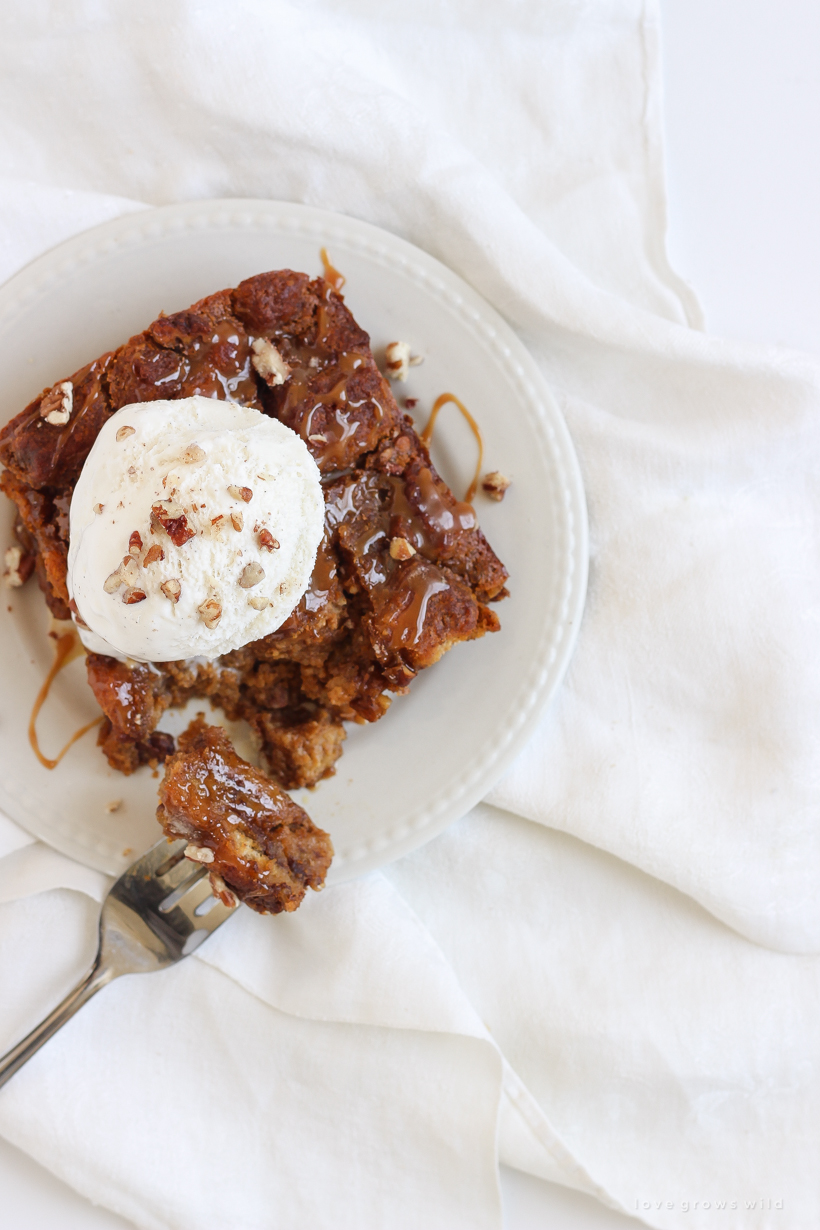 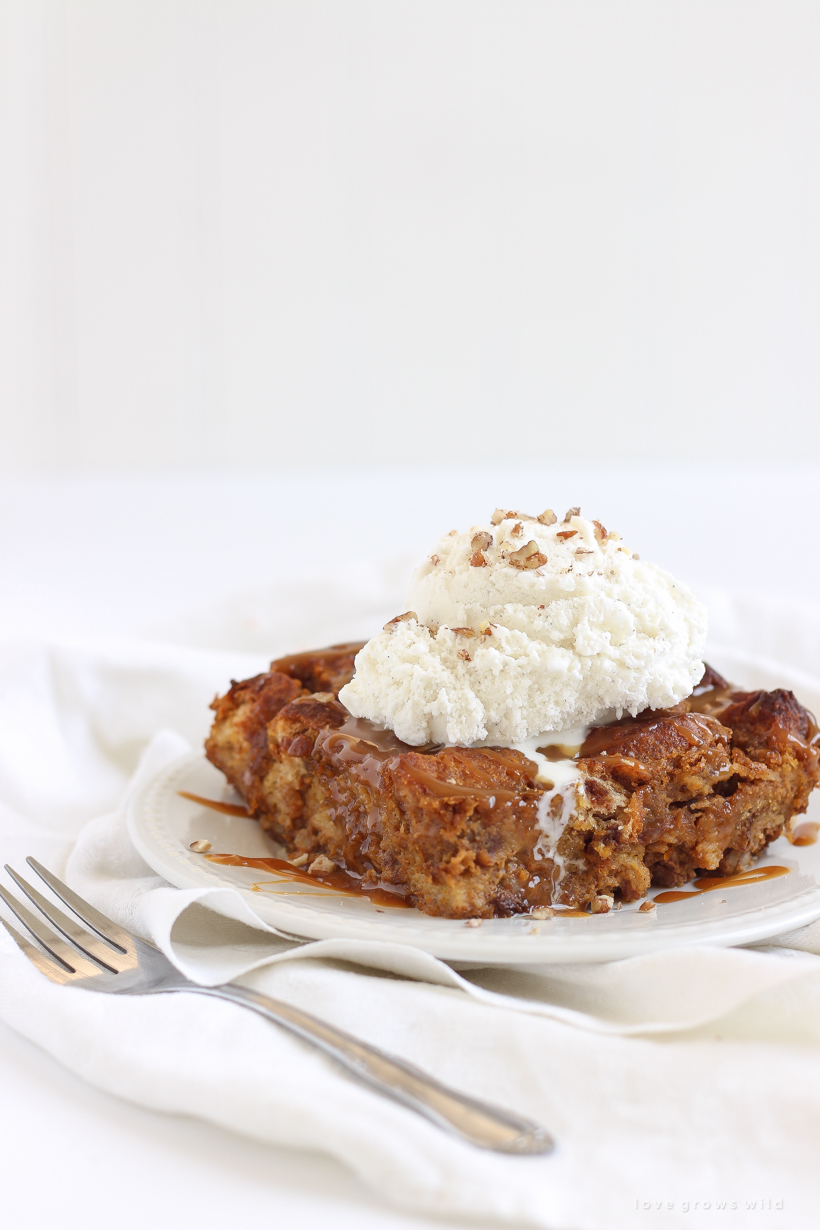 Preheat the oven to 350ºF. Grease an 8 x 8 inch baking dish and set aside. In a large bowl combine the dried bread cubes, pecans, and raisins.

Pour the mixture into the prepared baking dish and bake uncovered for 50-60 minutes until puffed and a knife inserted near the center comes out clean. Cool slightly and serve with salted caramel sauce, pecans, and ice cream on top, if desired.

Note: To quickly dry the bread cubes, spread them in a single layer on a baking sheet and bake at 300ºF for 15 minutes, stirring every 5 minutes.

Pin
Share
Tweet
Email
Print
Dessert
by Liz Fourez
5 Comments
PREVIOUS: How to Create a Framed Canvas Painting (even when you’re not an artist)
NEXT: 5 Easy Ways to Welcome Fall Into Your Home