These Crispy Smashed Potatoes are a great side dish for chicken, steak, pork, and more! They taste like a fried hash brown, but way healthier and way more delicious! 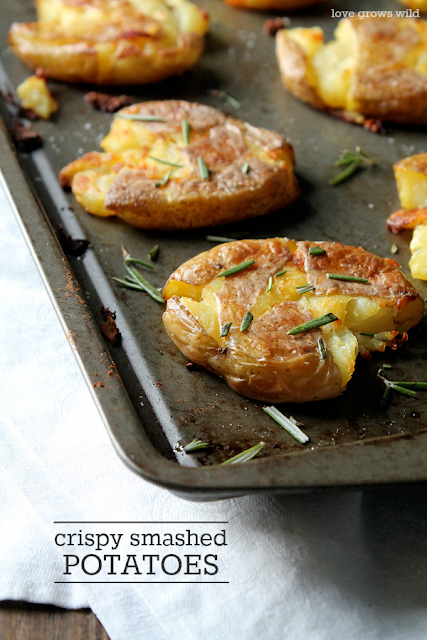 So here’s a short little story for you: My husband grew up on a farm. My husband thinks diets should consist of only steak, potatoes, eggs, and cheese. My husband has cholesterol issues. The End.
That just about sums him up in a nutshell, huh? Lol! Actually, he’s been a champ the past few months working out 5 days a week and eating well, so I really can’t poke fun at his cholesterol levels anymore. He’s the one giving me crap now for not working out, so maybe I should follow his lead… Right after I devour these Crispy Smashed Potatoes!
So the point of that fun little story was to tell you that there is a lot of potato eating in our house. A LOT. My husband would prefer that to be the only vegetable served to him, and my children would live on mashed potatoes if I let them! Luckily they have me to expose them to all sorts of interesting side dishes beyond the simple potato, (asparagus, mushrooms, zucchini… who knew??) but on those nights when potatoes deserve a spot on the menu, this is one of my FAVORITE ways to prepare them! 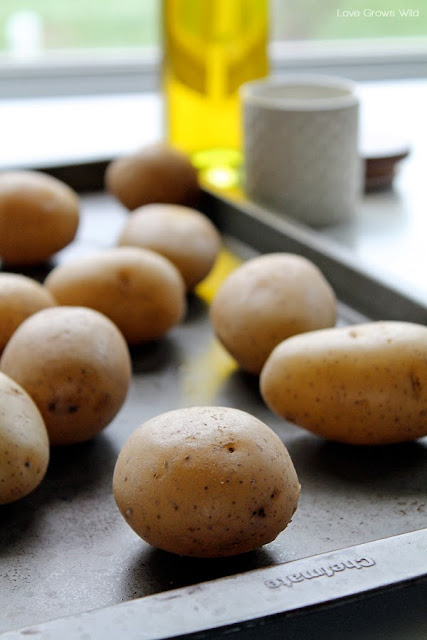 The best way I can describe these smashed potatoes is this: They taste like the most amazing crispy, salty, fried hash brown you’ve ever eaten, but ten times BETTER! It’s like the grown up version of tater tots. Are you hooked yet?
Here’s the low-down on creating these magical little taters:
First you boil the potatoes until tender to make them smashable. Is that a word? It is now! Smashable. I like to use the back of a solid metal spatula to do the smashing for me, but you can also use the heel of your hand if you’re short on utensils. Give the potatoes a gentle smash until the skins burst open and create a nice, flat surface. You don’t want to pulverize the potatoes, just smoosh them enough to flatten them out. There’s another new word for you: smoosh. 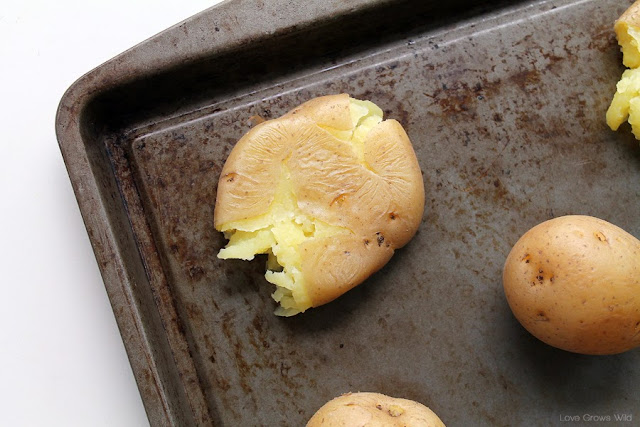 Generously drizzle olive oil and both sides of the potatoes and season with coarse salt. Don’t skimp on the salt! 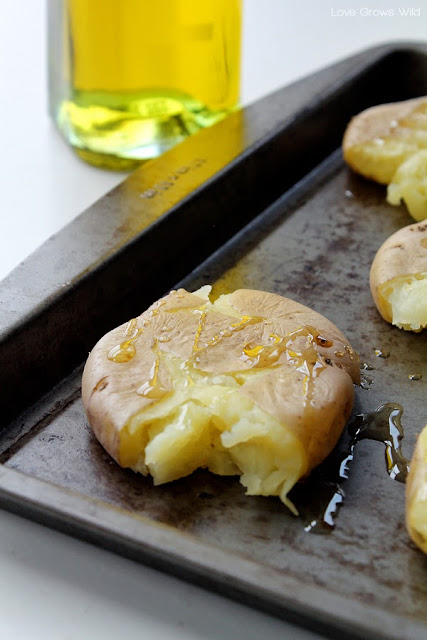 Now comes the best part: roasting the potatoes. Throw them in the oven for 15-20 minutes on each side until they are golden brown and perfectly crispy. Just look at those skins! I’m drooling already. 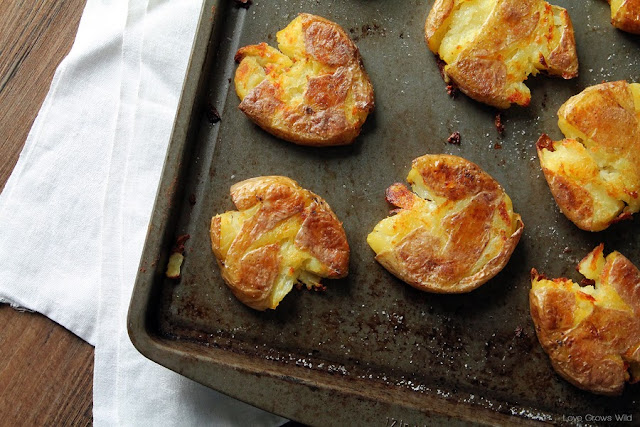 Now take a bite… Welcome to Potato Heaven! You will never want to make potatoes any other way again! I sometimes like to add fresh chopped rosemary or shredded Parmesan to my potatoes to make them extra tasty. 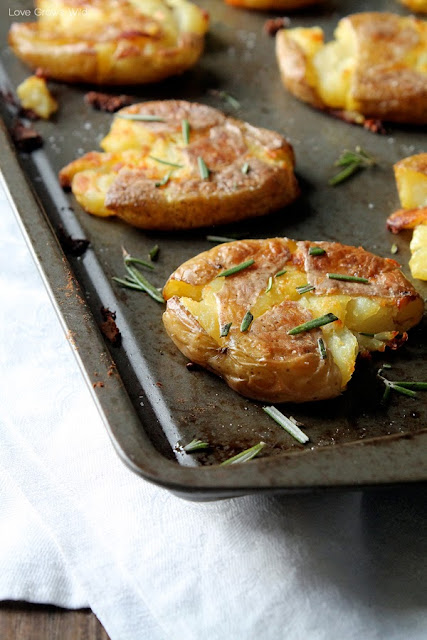 Smashed potatoes are a great side dish for steak, chicken, pork, breakfast… just about anything! Try these tasty taters for dinner tonight! 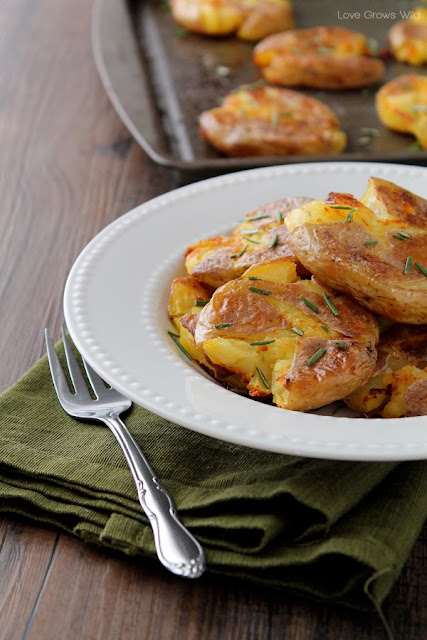 Crispy Smashed Potatoes
1 1/2 pounds small potatoes (yellow potatoes work best)
olive oil
coarse salt
Preheat oven to 450 degrees. In a large pot, bring potatoes to a boil in salted water. Reduce heat and simmer until tender, about 18-20 minutes. Drain potatoes and transfer to a baking sheet. Let cool 5 minutes, then gently smash each potato with the back of a solid spatula or the heel of your hand. Drizzle generously with olive oil and season with coarse salt, then gently flip the potatoes over and repeat on other side. Roast in the oven for 15 minutes, then flip potatoes and roast for another 15-20 minutes until golden brown and crisp.
Serves 4
Try these other great side dish ideas: 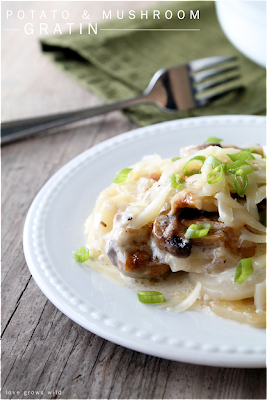 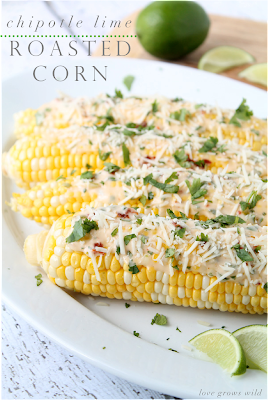 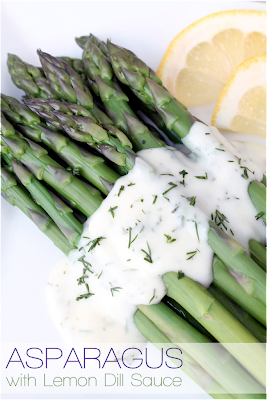