Our playroom makeover is nearly complete (yay!), and I have just a few more projects to share with you before the big room reveal! But before we can get to the pretty “after” photos, I have a few more things around the room to get organized.
My boys are messy creatures, and organizing is definitely not their forte. So when it comes to their toys, I try to make things as simple as possible to keep their playroom tidy. Both the boys got a Nintendo DS this year, and they’ve collected quite a few games for them. No matter how many times I remind them to put their games away, they always end up on the floor, in the couch, under their bed… you get the picture!
And not only are the games always a mess, but the cords to charge their video games are always hanging all over the place! It’s an eyesore and simply wasn’t working for me.
(Hi, my name is Liz, and I’m an obsessive organizer.)
I picked up a few inexpensive items from the dollar store, and created the perfect place to charge their Nintendo DS and store all their games. It’s so much better now! Here’s how I did it: 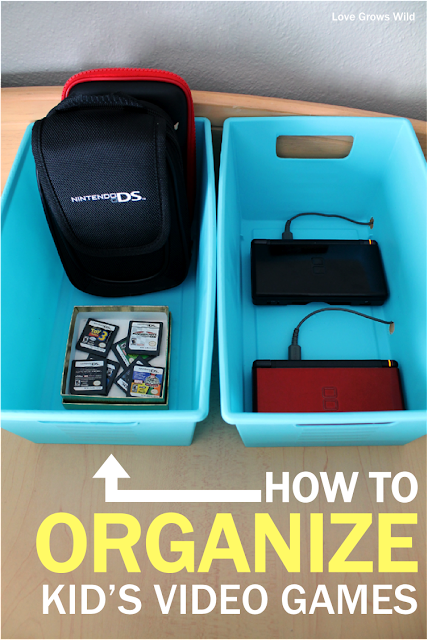 I knew I wanted a container that a) would conceal all the cords and games and b) didn’t cost much. I found exactly what I needed at my go-to store, Dollar Tree. I find so much awesome stuff there! These adorable blue locker-style plastic bins were the perfect size and the perfect price. It doesn’t get much better than $1 each! 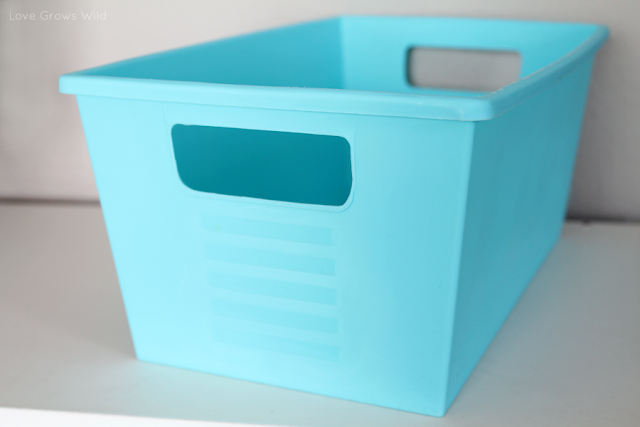 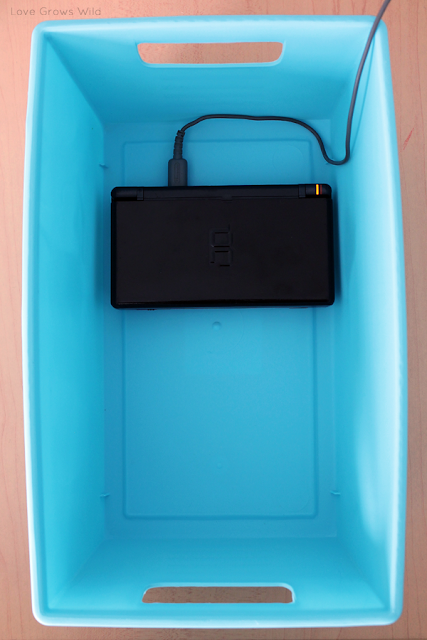 I made a mark on the side wall of the bin to run the cord through. No precise measurements, I just made sure there was enough space for both the plugs to fit. 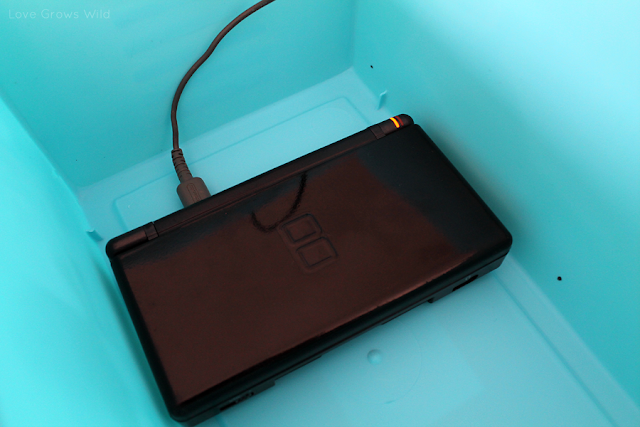 I removed the Nintendo’s and cords from the bin, and using my drill and a spade bit, drilled through the bin where I had marked. Since the plastic is very thin, it’s best to go slow to avoid splitting it! I placed the Nintendo’s back inside and ran the cords through the holes. Now the cords are hidden and won’t keep falling back behind the table every time they boys unplug their games. That $1 bin made the perfect charging station! 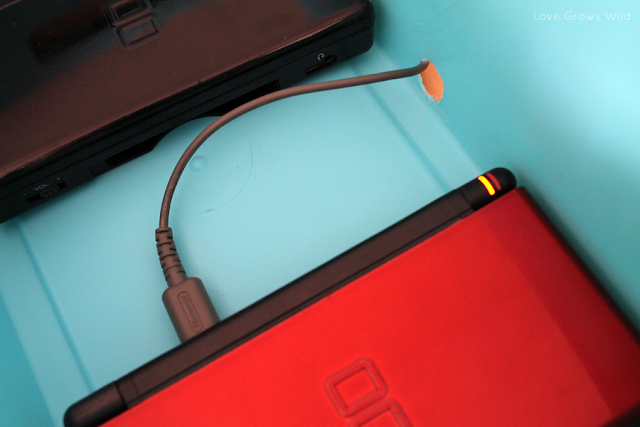 In the other bin, I used an old jewelry box to hold all their games. This way it will be easy for them to grab which game they’d like, and hopefully just as easy to put them away! 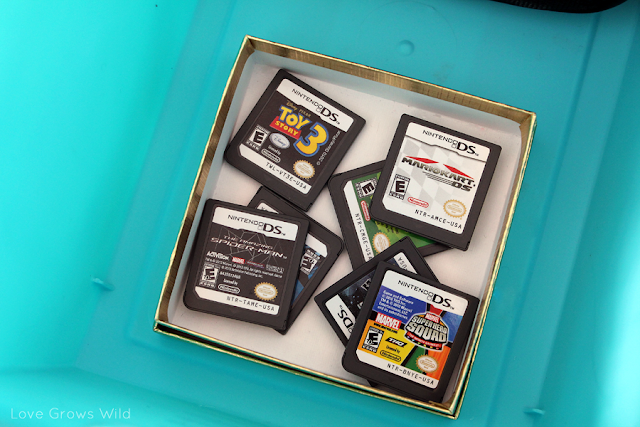 I also stacked their travel cases in the back of the bin. 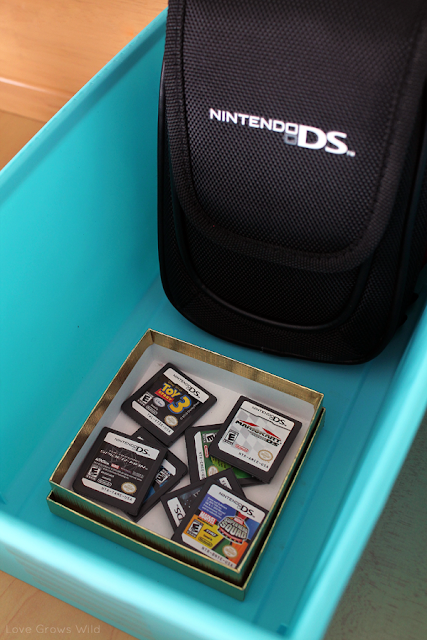 Now instead of a giant mess of video games, we have a nice, organized Nintendo DS station! 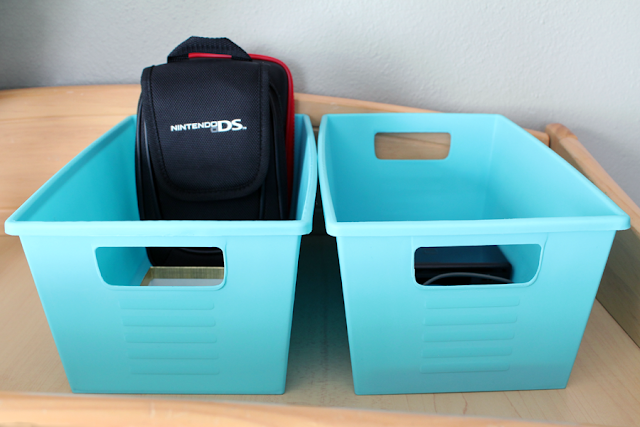 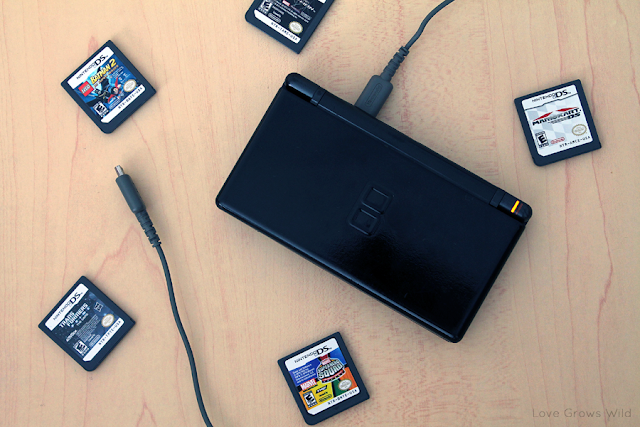 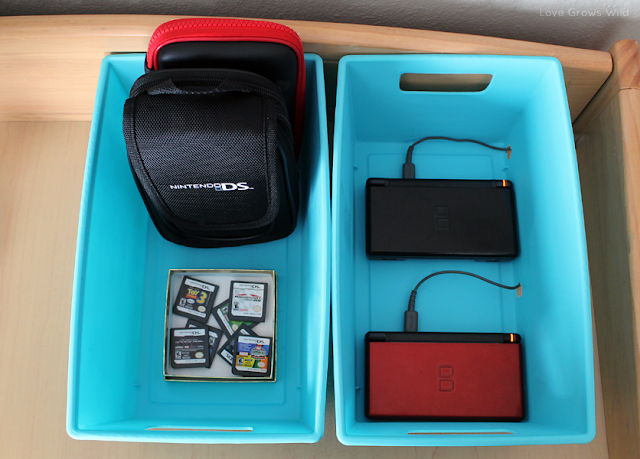 And to add a bit of a decorative touch to their new video game station, I added this globe my mother-in-law brought over last time they were here! Isn’t it the perfect color to go with their room? 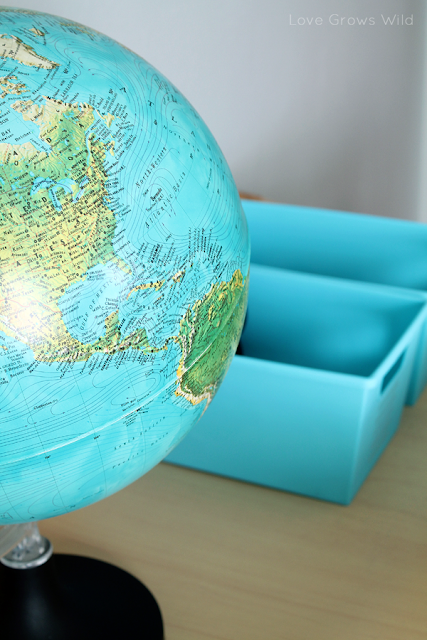 Stay tuned for more playroom organizing and decorating ideas and the BIG room reveal coming up!

Want to see all the projects from our Playroom Makeover?
Click here to check out the room reveal! 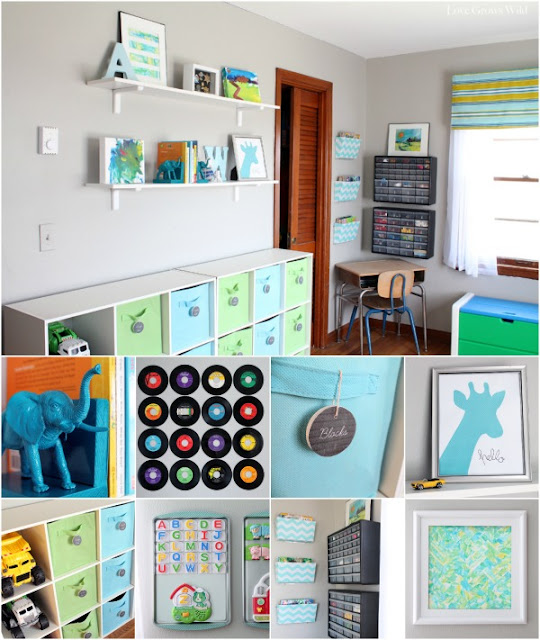